Owners who want to better understand their canine companions must recognize that dogs see the world from a different visual perspective. The differences begin with the structure of the eye. We have a good idea what dogs see because we know the make-up of the retina of a dog’s eye.

The retina is the light sensitive portion of the eye. This structure is located in the back of the inside of the eyeball. The retina contains two types of light sensitive cells; rods and cones. Cones provide color perception and detailed sight, while rods detect motion and vision in dim light. Dogs have rod-dominated retinas that allow them to see well in the dark. Along with superior night vision, dogs have better motion visibility than humans have. However, because their retinas’ contain only about one-tenth the concentration of cones (that humans have), dogs do not see colors as humans do.

Dogs see like a color-blind human. Many people think that a person who is red / green color blind cannot see any color, but there are variations of color blindness. Most people have vision that is trichromatic (three-color variations). People who are red / green color blind are dichromatic (two color variations). Dogs’ retinas can distinguish two colors. These colors are blue-violet and yellow. Dogs can also differentiate between shades of gray. Dogs are unable to recognize green, yellow, orange, and red. 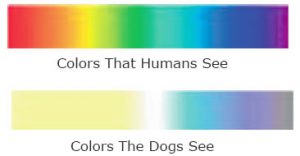 Dogs use other cues (such as smell, texture, brightness, and position) rather than relying solely on color. Seeing-eye dogs, for example, may not distinguish between a green or red stoplight; they look at the brightness and position of the light. This, along with the flow and noise of traffic, tell the dog that it is the right time to cross the street.

How a dog’s eyes are set determines the field of view as well as depth perception. Prey species tend to have eyes located on the sides of their head. This gives the animals an increased field of view and allows them to see approaching predators. Predator species, like humans and dogs, have eyes set close together. Human eyes are set straight forward while dog eyes, depending on the breed, are usually set at a 20 degree angle. This angle increases the field of view and therefore increases the peripheral vision of the dog. 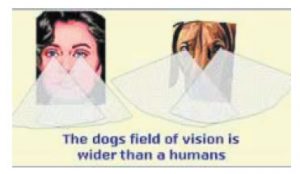 In addition to having less binocular vision than humans have, dogs also have less visual acuity. Humans with perfect eyesight are said to have 20/20 vision. This means that we can distinguish letters or objects at a distance of 20 feet. Dogs typically have 20/75 vision. What this means is that they must be 20 feet from an object to see it as well as a human standing 75 feet away. Certain breeds have better visual acuity. Labradors, commonly used as seeing-eye dogs, are bred for better eyesight and may have vision that is closer to 20/20.

If you’re silently standing across the field from your dog, don’t expect him (her) to recognize you. He’ll recognize you when you do some sort of motion particular to yourself. He (she) may also recognize your presence by his outstanding sense of smell and / or hearing. Because of the large number of rods in the retina, dogs see moving objects much better than they see stationary objects. Motion sensitivity has been noted as the critical aspect of canine vision. Much of dog behavior deals with posture and appropriateness. Small changes in your body posture mean a lot to your dog. Dog owners need to modify training based on this fact. If you want your dog to perform an action based on a silent cue, we suggest using a wide sweeping hand and arm motion in order to cue your dog. 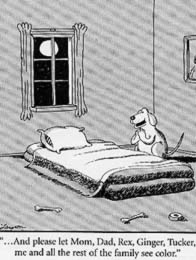 When dogs go blind, owners often wonder if the dogs’ quality of life has diminished to the point where they are no longer happy. Humans deal well with being blind, and humans are much more dependent on their eyes than are dogs. Blind dogs lead happy lives as long as they are comfortable. The owner may need to make some adjustments in the pet’s environment. Some of these adjustments include fencing the yard, taking leashed walks, and not leaving unusual objects in the dog’s normal pathways. Obviously, most blind dogs cannot navigate stairs very well. When blind dogs are in their normal environment, most people don’t know they are blind.

Font Resize
Contrast
Accessibility by WAH
Call Us Text Us